Joachim Trier, who directed The Worst Person in the World and co-wrote it with Eskil Vogt, said his Norwegian rom-com is epic in scope. Trier spoke with Deadline’s Matt Grobar at The Contenders Film: Los Angeles event Sunday.

“We’re pretending it’s a small story about a young woman trying to figure out what she wants to do with her life, but actually, we’re making it more epic in the structure,” Trier said.

Renate Reinsve plays Julie and won Best Actress at the Cannes Film Festival for her performance. The Worst Person in the World follows four years of her life but does not include every little detail.

“Through the chapters we’re allowed to create a contract with the audience where we can leave things out,” Trier said. “We can see a year pass and something new happens. It was a fun way to make the film move forward.”

Cannes Review: Joachim Trier’s ‘The Worst Person In The World’

A fan of classic American rom-coms, Trier said he was inspired by the films of George Cukor. Those films had more on their mind than the simple love story, he said. 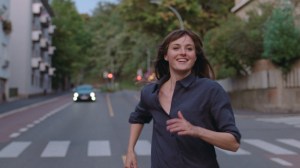 ‘The Worst Person In The World’
Montclair Film Festival

“The films George Cukor made, like The Philadelphia Story, were films not only about finding the right partner but existential films, films that dealt with important life choices,” Trier said. “The thing about it was to try to create something that had levity, and hopefully humor and at the same time had also also some serious drama in it.”

Trier wrote The Worst Person in the World for Reinsve. Trier’s 2011 pic Oslo, August 31st was Reinsve’s first film, and Trier said he was disappointed she hadn’t broken out in the film world yet.

“I decided after 10 years of watching her do great theater work to write this lead for her,” Trier said. “She’s a hard-working actor. She carries the film, I would say.”

The Worst Person in the World also stars Anders Danielsen Lee, who starred in Trier’s Oslo and Reprise (2006). He plays a love interest for Julie.

“It’s that kind of generational conversation relationship between the man in his 40s and a woman about to turn 30 where I found a lot of humor,” Trier said.

Trier also wanted The Worst Person in the World to be visually epic. He shot on 35mm film to capture it.

“I think when people say that closeups belong on television, I disagree,” Trier said. “I think to be intimate, close to characters on a big screen is a unique experience. To have the right skin tones and the right colors, I shoot on 35.”

Norway’s official entry in the International Film Oscar race stars Reinsve as Julie, a spirited 30-year-old who has everything going for her. But she’s also experiencing growing disenchantment with a longtime serious boyfriend (Lie). At loose ends, Julie aimlessly wanders around the city on a beautiful summer evening and quietly crashes a wedding party in full progress. Encountering Eivind (Herbert Nordrum), they start flirting in funny, intoxicated ways. But the good times begin to wane, and with the passing of time and opportunities comes a sense of missed chances and mistakes resulting in a potent melancholy.

The pic bowed at Cannes in July, and Neon will release it in theaters on February 4.