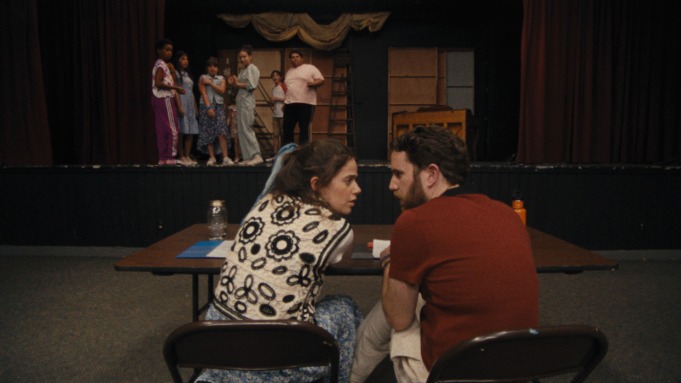 Theater Camp is a hilarious film by first time directors Molly Gordon (Booksmart), and Nick Lieberman. This was a collaborative effort between friends as it’s written by Molly Gordon, Ben Platt, Nick Lieberman, and Noah Galvin. You can tell this is a labor of love because while it’s kooky, it’s full of vulnerability and earnestness.

The movie opens at AdirondACTS (located in the Adirondacks in upstate NY), a rundown theater camp founded by Joan (Amy Sedaris). While they’re readying for the summer session of kids to arrive, the staff is shocked to learn Joan has fallen ill. A diverse group of kids showed up,  many of whom are unsure of their talents but the camp staff is worried that without their leader, they won’t be able to move on, but they do manage to finally pull it together to get these kids into shape. The AdirondACT crew is composed of a peculiar bunch of characters. Amos (Ben Platt) and Rebecca-Diane (Molly Gordon) are the theater director who teaches acting and singing; Glenn (Noah Galvin) is the in-house stage manager; Clive (Nathan Lee Graham) is the dance teacher who can’t stop talking about Studio 54; Gigi (Owen Thiele) who is in charge of costume design; Janet (Ayo Edebiri) doesn’t know what she’s doing; and Joan’s son Troy (Jimmy Tatro), a clout chasing himbo who inherited the camp from his mom.

The kids go through a skills gauntlet as the staff test each kid to examine their strengths and weaknesses to gauge where their talents are best suited. The staff decide that this year’s production will be  Joan Still, a biographical musical about the camp’s former owner. While everyone gets fired up about the show, Troy has learned that the camp is set to be foreclosed since they are behind on taxes. Since he’s not the theater type, and has no money to pay off the debts, Troy contemplates whether the camp is worth selling to AdirondACTS rivals who want the property, or does he work hard to keep the camp open and keep his mother’s legacy alive.

Theater Camp is like an episode of the office but in the Adirondacks. The film jumps back and forth between staffers and campers, while documenting their experiences. The staff are like hippies who each teach in their own eccentric way, and the students buy into it. This camp isn’t for those in high society, it’s for the outsiders, the misfits, the nerds who want to sing, dance, design, and light, and be in charge of their own show.

The adults have their problems that sometimes spill over. Troy has lost control of the camp and the property. Diane wants to build a career beyond the camp, and he wants her to stay. Glenn is the stage manager holding on to Troy’s secret about the camp. They have full character arcs, while Janet, Clive and Gigi, as characters and the only staff members of color, don’t have much to do, even though the performances are good.

It was quite a risk to shoot this verite doc style, but really it was the only way to fully immerse the viewer into this unconventional world. Playing it straight wouldn’t have worked or been as engaging.the actors chew up every scene with reckless abandon, and as long as you’re laughing, that’s all that matters.  There is just something about content from first time directors that is so thrilling and vibrant. If the duo carry this energy to future projects, both have bright futures as directors.

Theater Camp is at its best when the children are the focus. They are so quick  witted, snappy, and honest. Props to the casting director for finding an inclusive group of young people that are able to bring the viewer into their circle of trust. Thanks to Gordon and Lieberman, these kids get to be their full authentic selves on screen.While I didn’t go to theater camp, I was involved in community theater. I can guarantee that the film’s portrayals of these people are 85% accurate. The theater community is an interesting bunch that often goes misunderstood. Like anyone else that loves what they do, theater folks love to let the world know. It’s a community that is all about embracing who you are as a person being comfortable in your skin, and that’s the core message of this movie.