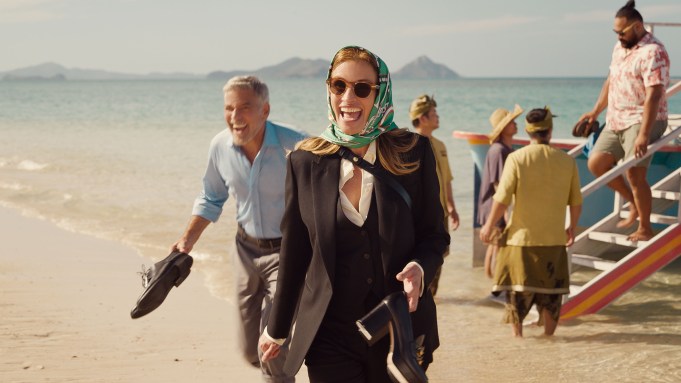 Universal/Working Title’s Ticket to Paradise has winged past the $100 million mark globally. With Tuesday’s grosses included, the Julia Roberts–George Clooney rom-com’s split is $20.6M domestic and $81.9M from the international box office for a worldwide total of $102.5M so far.

Having released early overseas, Ticket to Paradise, directed by Ol Parker, just went out in North America this past weekend. With a $16.3M launch, it exceeded projections and drew an A- CinemaScore; it’s currently 89% positive with audiences.

The tropical romp about a divorced couple who team up and travel to Bali to stop their daughter from making the same mistake they once made, has been humming along nicely since its offshore rollout began in early September, helping bring back the underserved “older” female demo which has been amongst the most reticent to return to cinemas. Domestically, the launch-weekend audience was 64% ages 35 and up.

This session, and at today’s exchange rates, Ticket to Paradise surpassed the total overseas haul of About Time and Yesterday, while the EMEA region overtook the lifetime of Last Christmas. Also, 29 markets have now overtaken the run of Bridget Jones’s Baby including Mexico in the most recent frame.

Earlier this month, this latest collaboration for Roberts and Clooney led the duo to a new milestone. Five films in which the mega-stars have worked together have grossed a combined $1 billion at the worldwide box office.