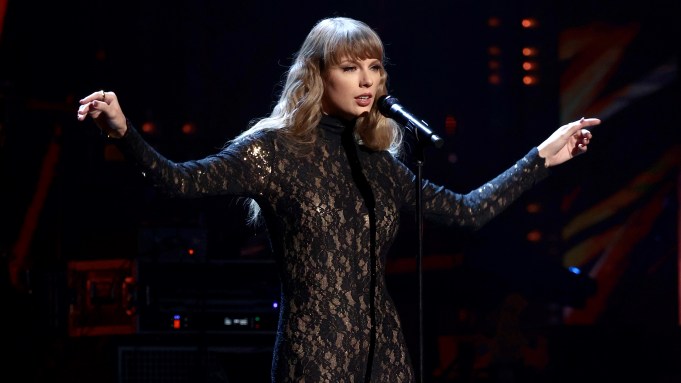 After presales for Taylor Swift’s The Eras Tour crashed the Ticketmaster site on Wednesday, the company announced that tomorrow’s planned public on-sale window was being cancelled. It is unclear whether another public on-sale window will be announced for the tour or not, but given that the ticketing giant cited “extraordinarily high demands on ticketing systems and insufficient remaining ticket inventory to meet that demand,” that looks unlikely.

Wednesday’s issues sparked outrage among fans, with some waiting hours, some being logged off the site automatically and others likening it to the Hunger Games. Today’s announcement was quickly met with fury from Swifties as well.

Due to extraordinarily high demands on ticketing systems and insufficient remaining ticket inventory to meet that demand, tomorrow's public on-sale for Taylor Swift | The Eras Tour has been cancelled.

Within minutes of the 12 p.m. PT announcement, fans expressed disbelief that Ticketmaster continued to fail at its one key duty: To sell tickets. Especially given all the extra fees the company charges.

Ticketmaster will sell a $50 concert ticket and then tack on like $49.99 in additional unexplained fees but at least they're taking all that money and using it to build a completely non-functional ticket-selling system

Others offered a modest proposal: Claw back all the tickets now for sale online by scalpers for “$11,000-$50,000” and use them to fill the general onsale demand from fans.

Unbelievable how badly @Ticketmaster fucked this up! How about canceling the $11,000-$50,000 tickets the scalpers are selling and open them back up to actual fans! I have tickets but I am so upset. How could you let this happen! #TaylorSwiftErasTour #TicketmasterIsOverParty https://t.co/My7sGAnj3R

Overwhelming demand from the same fans who had rocketed 10 songs from Swift’s most recent release Midnights to the top 10 of the Billboard Hot 100 — a first-time feat in the chart’s history — is likely one of the contributing issues.

In response to Wednesday’s issues, Rep. Alexandra Oscasio-Cortez wrote on Twitter, “Daily reminder that Ticketmaster is a monopoly, it’s [sic] merger with LiveNation should never have been approved, and they need to be reigned in. Break them up.”

She weighed in again today shortly after Ticketmaster’s annoucnement.

Ticketmaster monopoly got you down?

Sen. Amy Klobuchar, the chair of the Senate antitrust subcommittee, fired off a letter earlier today to Ticketmaster on Thursday amid concerns that the outages on its site for Taylor Swift concerts reflect a lack of competition in the business.

The letter to Live Nation Entertainment CEO Michael Rapino saw Klobuchar writing that she had “serious concerns about the state of competition in the ticketing industry and its harmful impact on consumers. Reports about system failures, increasing fees, and complaints of conduct that violate the consent decree Ticketmaster is under suggest that Ticketmaster continues to abuse its market positions.”

Klobuchar has been a critic of the concert ticket market, and argued that Ticketmaster’s “power in the primary ticket market insulates it from the competitive pressures that typically push companies to innovate and improve their services. That can result in the types of dramatic service failures we saw this week, where consumers are the ones that pay the price.”

Taylor Swift’s tour sale is a perfect example of how the Live Nation/Ticketmaster merger harms consumers by creating a near-monopoly. I’ve long urged DOJ to investigate the state of competition in the ticketing industry. Consumers deserve better than this anti-hero behavior.

A Ticketmaster spokesperson did not immediately respond to a request for comment.

But Greg Maffei, the CEO of Liberty Media, the largest shareholder in Live Nation, told CNBC on Thursday that the overload was “a function of Taylor Swift. The site was supposed to open up for 1.5 million verified Taylor Swift fans. We had 14 million people hit the site, including bots, which are not supposed to be there.”

He added, “Though AOC may not like every element of our business, interestingly, AEG, our competitor, who is the promoter for Taylor Swift, chose to use us because, in reality, we are the largest and most effective ticket seller in the world.”

It’s not the only time in the past year that fans have complained about outages on the site. Last December, Adele fans trying to secure seats via a presale for her tour encountered glitches. Ticketmaster, at the time, said it was the result of an Amazon Web Services outage.

Jill Goldsmith contributed to this report.