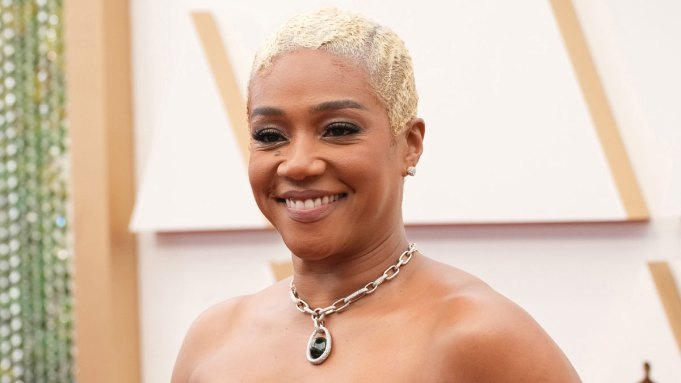 There was a semi-awkward moment at tonight’s Sundance Film Festival premiere of the Tiffany Haddish-led sci-fi film Landscape with Invisible Hand. During a post-screening Q&A with castmembers and filmmaker Cory Finley, an audience member asked what he prefaced as “a provocative question.”

Posing it “mainly for the producers and also for the Sundance programming team,” the questioner asked the panel if they “found it ironic that you have a film that’s about exploited young artists and also has studio financing having its world premiere at an indie film festival.”

“First of all,” she began with exaggerated emphasis, to the crowd’s amusement, “I’m a producer on this film, and I didn’t feel exploited. And I feel like it’s very clear [Finlay] stood up for what he believed in, and I think that’s what every artist should do.”

Watch the full exchange below.

MGM, Plan B and Annapurna are behind the film, which is Finley’s follow-up to his Emmy-winning Bad Education starring Hugh Jackman.

Haddish was onstage with writer-director Finley and the pic’s Michael Gandolfini and Kylie Rogers. Asante Blackk and William Jackson Harper also star in the pic based on M.T. Anderson’s novel.

Landscape with Invisible Hand depicts a near future in which an alien species known as the Vuvv has taken over Earth. After the Vuvv’s labor-saving technology causes Earth’s job market and global economy to collapse, a teenager and his girlfriend cook up a way to make much-needed money by broadcasting their dating life to the fascinated aliens. Unfortunately, things go badly when, over time, the two teens come to hate each other and can’t break up without bankrupting their families.

Here is the question and answer:

Tiffany Haddish defends the presence of her #Sundance-premiering film "Landscape with Invisible Hand" after an audience member called out the filmmakers and festival programmer for showcasing a studio-backed film at an independent film festival pic.twitter.com/KKnVRPzT5w