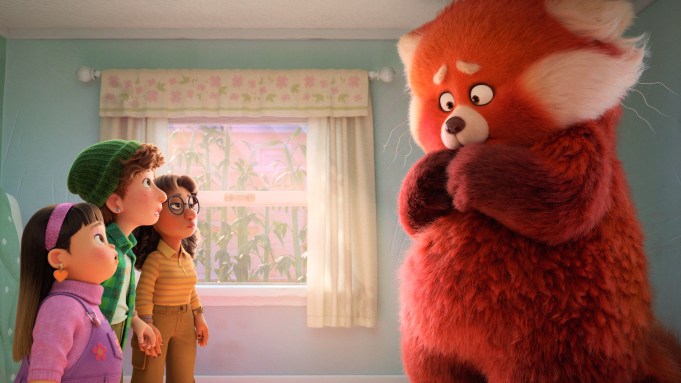 When Domee Shi learned that Turning Red had been nominated today, she says she was struck by a “crazy mix of emotions.”

“I’m mostly over the moon and excited, but still kind of in shock,” she told Deadline. “To be honest, with all of the crazy shit that’s been happening in California with the shootings, I’m still trying to process that, but also this amazing news that our film has gotten nominated and what it means for the Asian community and what it means for me to have this film that’s so personal be recognized by such a global audience.”

Based on Shi’s own childhood, the film follows a 13-year-old Chinese Canadian girl coming into adolescence. “I hope that for all of the kids and young adults dealing with the messiness of puberty and growing up, and fighting with their moms, that this movie can help heal them, can make them laugh and can help them understand and process the crazy emotions inside of them.”

The most important thing for Shi was to bring about a conversation about how people of different cultures and generations process their emotions. “It’s been such an amazing experience having audience members, of the Asian community and of other immigrant communities, come up and thank us for making this movie and for being able to start those conversations,” she says. “Not just with their kids who are going through puberty but also with their parents as well… It’s a lot of themes and ideas that you don’t really talk about, especially in the Asian community and in immigrant communities.”

Shi is currently in development of another feature film at Pixar, but can’t reveal any details. “All I can really say about it is it’ll be very me and will be very much inspired by my background, my culture, and the themes and ideas that I love talking about… I think with movies like ours and Everything Everywhere All at Once, it’s just really cool and really important to be see more of these stories in the media.”