For Elaine Bogan’s animated feature film directorial debut, DreamWorks Animation’s Spirit Untamed, it seemed like there was a constant bit of kismet at play.

“When I was first called and contacted to become part of the Spirit franchise, I jumped out of my car,” Bogan told Deadline’s Contenders Film: Los Angeles on Sunday while sharing a panel with composer Amie Doherty. “I was sitting in the parking lot at the Los Angeles Equestrian Center just after having ridden my horse, so the timing of everything felt great.”

Bogan said she’d long held a deep affinity for the Spirit property, going back to the initial film in the franchise, 2002’s Spirit: Stallion of the Cimarron.

“I’ve been an equestrian since I was a kid, and I grew up watching the first film until I broke the DVD in half,” she revealed.

‘Spirit Untamed’ Review: Jake Gyllenhaal Saddles Up, But This Sweet Toon Belongs To A Girl And Her Irrepressible Horse

Bogan was also delighted to discover in the development and casting processes that her voice actors also had unique bonds to the material.

“Some of my favorite moments were the very initial meetings, where we would bring an actor in to pitch them the story and tell them about the character they could potentially play,” she said. “And more than once that person, after we pitched, would say, ‘But were you writing this about me? Like, is this actually me?’” 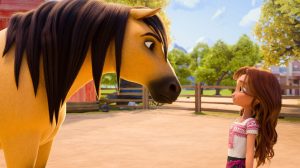 Bogan recalled: “There was an instance where McKenna Grace came and pitched for the character of Abigail and how she when they got out of the adventure, she’d pull out her ukulele and annoy the crap out of everybody. And she literally jumped up and said, ‘My ukulele’s in car – can I go get it and play you a song?’”

“A large part of Jake’s character, Jim, his whole finale where he just poured his heart out onstage and sang terribly, but he did it because he loves Lucky – that all came from collaboration and conceptual ideas from Jake,” Bogan said. “And Julianne’s character became so much warmer because of the warmth of her personality in the room.”

The filmmaker added, “It just felt like everyone who came in had something to really personally and deeply connect to, [which] I feel helped us tell a really authentic-feeling family-driven movie.”

In Spirit Untamed, Lucky Prescott’s life is changed forever when she moves from her home in the city to a small frontier town and befriends a wild mustang named Spirit. Isabela Merced voices Lucky, and the cast also includes Walton Goggins, Andre Braugher, Eiza Gonzalez and Marsai Martin, along with Grace, Gyllenhaal and Moore.