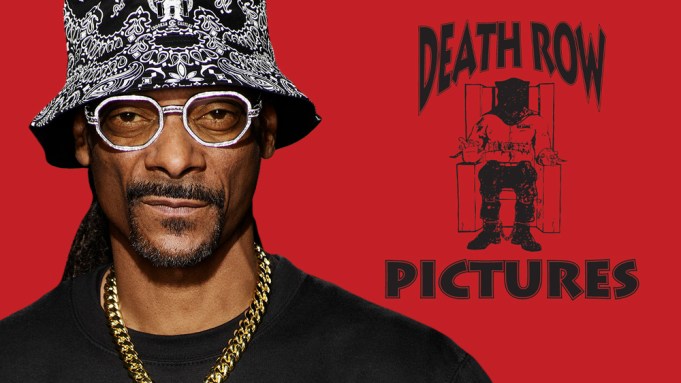 In what would be the first definitive biopic of the hip-hop star and pop culture icon, Universal Pictures is developing a film about the life of Snoop Dogg. The film marks the first project under Snoop’s newly formed Death Row Pictures, with Allen Hughes on board to direct and Joe Robert Cole set to write the script. Snoop will produce along with Hughes and Sara Ramaker.

“I waited a long time to put this project together because I wanted to choose the right director, the perfect writer, and the greatest movie company I could partner with that could understand the legacy that I’m trying to portray on screen, and the memory I’m trying to leave behind,” said Snoop. “It was the perfect marriage. It was holy matrimony, not holy macaroni.”

Snoop Dogg Signs With WME In All Areas

The pic marks the first film from Snoop’s Death Row Pictures and will incorporate music from his massive catalog. The hip-hop legend purchased the Death Row brand at the beginning of the year for an undisclosed sum from MNRK Music Group, which is controlled by private equity group Blackstone.

“I wanted to be the CEO of Death Row Records and basically take over the merchandise and rerelease their music, do documentaries, and possibly do my life story,” the he told GQ in December. Today’s news makes good on one of those promises.

Over the past decade, Universal and its chairman Donna Langley has built a number of strong relationships with musicians in order to get sign-off to not only tell their story but use their music for future films. Besides Snoop Dogg, the studio is currently developing Madonna and Cher biopics with the musicians fully on board.

“Snoop Dogg’s life and legacy make him one of the most exciting and influential icons in popular culture,” said Langley. “We met with Snoop shortly after he acquired Death Row Records and had the opportunity to hear his story in his own words. We are humbled to be able to create the lasting document of this singular artist.”

Universal is also behind one of the more successful hip-hop biopics ever with the Oscar-nominated N.W.A pic Straight Outta Compton, which blew away box office records for a musical biopic grossing more than $200 million (coincidentally, Snoop Dogg was featured in that film given his ties to group co-founder Dr. Dre).

Snoop has reigned for nearly three decades as a rapper, singer, songwriter, actor, record producer, DJ, media personality, businessman and empire builder. In addition to his work in music, Snoop is a serial entrepreneur with endeavors in the Web 3.0, tech, entertainment, lifestyle, global consumer brands, food/beverage and cannabis industries.

Snoop first hit the scene in 1992 when he featured on Dr. Dre’s debut solo single “Deep Cover”, then on Dre’s debut solo album The Chronic. He has sold more than 35 million albums worldwide and is a 17-time Grammy nominee, with American Music Award and Primetime Emmy wins.

Hughes is no stranger to biopics on hip-hop superstars following his work on the acclaimed HBO docuseries The Defiant Ones, which profile the rise of Dre and legendary music executive Jimmy Iovine. Hughes’ strong ties to the music community, especially hip-hop, granted access to interviews with countless musicians including Snoop, who had his own featured segment in the doc.

He is also currently directing and executive producing Dear Mama, the first definitive, comprehensive five-part documentary series on the late hip-hop icon Tupac Shakur and his mother Afeni Shakur, who was an activist; Hughes has the full cooperation of the Shakur estate, including access to all of his music and poetry. Dear Mama had its world premiere at the Toronto Film Festival 2022 as part of the Primetime program.

“Snoop Dogg is one of the most internationally beloved figures in hip-hop. There’s just something about his energy that brings people of all walks of life together,” Hughes said. Snoop Dogg, not just the artist, but the man and his brand, has transcended generations with his connection and appeal to audiences. His story is so authentic and utterly inspiring, and to have the opportunity to tell his story allows me to go back to the hood 30 years after Menace II Society, and say more now than I could then.”

Cole co-penned Marvel’s Black Panther with Ryan Coogler, for which they received an NAACP Award and an Oscar nomination. Cole and Coogler most recently co-wrote Black Panther: Wakanda Forever, set for release this weekend.

Cole’s feature directorial debut for Netflix, All Day and a Night, starring Ashton Sanders and Jeffrey Wright, was released in 2020. He also produced the Emmy-winning FX series American Crime Story: The People vs. OJ Simpson, for which he received an Emmy nomination for writing the episode “The Race Card.”  Cole is an executive producer and director on FX’s upcoming limited series Class of ‘09.

“I’ve been a fan of Snoop since ‘Deep Cover.’ His music and the films of Allen Hughes have left an indelible mark on me over my life,” said Cole. “What excites me most is the humanity of Snoop’s journey to international icon. Universal has proven they can guide a movie like this to something special.  I’m proud to be a part of the team.”

Mike Knobloch, NBCUniversal’s President of Music and Publishing, will supervise the project’s music.  Universal’s SVP Production Development Ryan Jones will oversee the project for the studio.