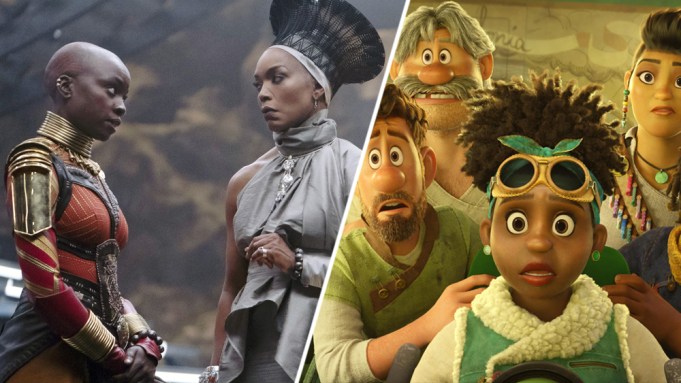 THANKSGIVING AM: It’s theatrical forever for Disney/Marvel Studios’ Black Panther: Wakanda Forever which is coming in ahead of yesterday afternoon’s estimates with $10M, but not so much for Disney Animation’s Strange World which did $4.2M yesterday. This will translate, per industry estimates, into a 3-day and 5-day of $43M and $55M-$60M, respectively, for Wakanda Forever, and a disastrous 3-and 5-day of $15.8M and $20M-$23M for Strange World which cost a reported $135M. That’s not the worst for a Disney animated pic, particularly over Thanksgiving, but it’s damn close: Their $140M original animation movie Treasure Planet was in freefall back in 2003 with a 3-day of $12M and $16.5M.

One former Disney exec once told me, “They’re very good at making the best worst case decision” and in the scenario of Strange World, that’s sending it to Disney+ by the holidays. Even though the pic is tanking in theaters, that type of big screen release will at least give it some mojo in ancillaries. Everybody remember that as theatrical tries to finds its footing, especially among these adult titles which aren’t finding an audience (either that or else it’s a case of too many niche movies in the marketplace cannibalizing each other).

Speaking of adult titles, while Sony and Black Label Media’s Devotion per public box office reporting is seeing $1.8M from yesterday at 3,405 theaters, and $10.2M for the 5-day and a 3-day of $6.1M, industry sources tell us this AM that Netflix’s sneak preview of release of Glass Onion: A Knives Out Mystery is killing off all adult competition, and it’s only in 638 theaters. We hear Wednesday was very close to $2M-$2.5M, with the 3-day and 5-day projected out to $8.5M and $10M-$12.3M, which is amazing for adult counterprogramming right now. We’ll update you if Netflix reports numbers.

If the Rian Johnson-directed, Ram Bergman-produced whodunnit sequel arrives at the high end, that’s a massive $19,2K theater average and proof adults still want to go to the movies (by comparison, Fabelmans, if it sticks to its 5-day number, will do a theater average of $4,7K). As we told you previously, particularly as many of these films post single digits, they’re too niche, hence their lower ticket sales. Any development executive wrecking their head over what works right now on the big screen among older adults, go splash some cold water on your face and remember last year’s starry crime caper package from Ridley Scott: House of Gucci with Lady Gaga, Adam Driver, Jared Leto and Al Pacino. That movie, when there were more concerns about Covid, posted a $14.4M 3-day and $22M 5-day. Just a refresher on the type of films which get adults out.

And get this: iSpot shows that Netflix spent less than the majors to open Glass Onion with $4.3M in TV spots to Disney’s $16M on Strange World, Sony’s $14.8M on Devotion, Searchlight’s $10.8M on The Menu and Uni’s $8.5M on The Fabelmans.

Daniel Craig as Benoit Blanc in ‘Glass Onion: A Knives Out Mystery’

RelishMix reports that Knives Out 2 had a massive social media reach of 307.7M, a near 3x increase from the first one which opened to $26.7M and $41.1M back in 2018. Among those socially activated on the cast there’s Kate Hudson at 17.7M, Dave Bautista at 15.4M, Edward Norton at 4.1M, Janelle Monáe at 7.4M while Daniel Craig is still off the grid.

Says RelishMix about the buzz, “Convo on Glass Onion runs positive with mixed curiosity on how it will stack up to the success of version one. Fans speculate from materials, whodunnit in the cast with chatter about the ‘smoothest transition for a 007 ever’ — as well as support for Dave Bautista’s tattoos and adoration for Edward Norton, Kate Hudson and Janelle Monáe. Fans are threading about the sliding streaming windows and openly debating whether to wait or go — while wondering about how surprising the reveals in the story will play.”

Strange World received four stars on Comscore/Screen Engine’s PostTrak and a B CinemaScore. Men over 25 were dominant at 33%, but hated it at 66%. Women over 25 were next in attendance at 24% but gave it a 90% grade; then men under 25 at 23% and 83% grade and women under 25 at 21% who gave the pic its best grade at 92%. Diversity demos were 47% Caucasian, 25% Asian, 22% Hispanic and 6% Black. Not a flashy recommend at 55%. RelishMix noticed that Strange World awareness levels on social were 22% below norms for family animated films at 172M. The campaign on Disney’s social runs on the cross-promotion momentum from the studio’s social network is at 107.7M and Disney Animation’s at 26.2M across Facebook, Twitter, YouTube, Instagram, and TikTok, including cast at 217.2M with total views at 38.2M across all channels.

While ticket sales will decline today due to the holiday by 16%, they’ll be up by tomorrow on Black Friday, a big day for moviegoing, by +93%.

WEDNESDAY AFTERNOON: Early figures and take the 3-day and 5-day with a grain of salt as projections are always off at this point in a Thanksgiving stretch. Disney/Marvel Studios’ Black Panther: Wakanda Forever is leading today with $9.5M, even with yesterday and a $50M Wednesday through Sunday outlook. However, Strange World, as we thought, it falling below its $30M projection with $23M-$27M. Including previews, today looks like around $4.5M to $5M for that animated movie. Encanto last year had an opening day of $7.6M. Apparently, Strange World closed the gap on early matinees with Encanto, and hopefully that momentum continues.

Janelle Monáe as Andi and Kathryn Hahn as Claire in ‘Glass Onion: A Knives Out Mystery’, courtesy Netflix

At this minute, I’m hearing erratic reports about Glass Onion: A Knives Out Mystery. Some have it ahead of all the frosh adult counterprogramming in presales, while others do not.

WEDNESDAY AM: It’s not like people weren’t going to the cinema yesterday as we head toward Thanksgiving: Disney/Marvel Studios’ Black Panther: Wakanda Forever made $9.5M at 4,258 theaters on Tuesday propelling the Ryan Coogler-directed sequel past the the three century mark with $303.7M, making it the 7th film to pass that threshold this year after Top Gun: Maverick, Doctor Strange in the Multiverse of Madness, Jurassic World: Dominion, Minions: The Rise of Gru, The Batman and Thor: Love and Thunder.

However, there really wasn’t any excitement last night to see previews of Disney Animation’s Strange World, which as we told you doesn’t look so good for the holiday stretch. Off previews that started at 6pm, Strange World only did $800K, which is arguably the lowest for a Disney Thanksgiving theatrical release in the era of movie theaters holding early previews. That’s close to half of what Encanto did in its Tuesday preview a year ago with $1.5M, and that’s when there were more pandemic fears among moviegoers. A $30M+ five-day start for Strange World at 4,174 theaters is what we figured, but it wouldn’t be a surprise if it’s lower as the weekend belongs for a third time to Wakanda Forever, which is now apt to do $50M+ over Wednesday to Sunday. Audience score on Strange World is currently low on Rotten Tomatoes at 62%, but only from 50 reviews.

Wakanda Forever‘s Tuesday, +36% over Monday, reps its third highest weekday (outside Friday) after its first Monday and Tuesday which respectively did $11.1M and $12.6M.

Searchlight’s The Menu was second yesterday with $1.3M at 3,228 venues, +26% over Monday for a running five-day total of $11.3M at 3,211. While A24’s Midsommar –a good genre comp here for Menu– took a different trajectory, opening on a Wednesday in July, the Mark Mylod directed Anya Taylor Joy movie here is 4% of the Ari Aster movie in its first five days.

In 5th was Universal’s George Clooney and Julia Roberts romantic comedy, Ticket to Paradise, which made $490K at 3,268 theaters, +22% from Monday for a running total of $62.4M. The pic is already available to watch on PVOD.

The Sony distributed Black Label Media war movie Devotion made $615K at 2,982 theaters which started showtimes at 6PM. That figure is above the Thursday previews figure for Focus Features’ BlacKKKlansman which did $600K before seeing a $3.6M Friday, and $10.8M opening, however, that was a very different time of year, that being late summer pre-pandemic 2018. The Jonathan Majors-Glen Powell movie is expected to see $7M-$8M over five days.

United Artists Releasing’s wide expansion previews of Bones and All did $345K as it heads to 2,700 theatres today. Through five days, apart from previews, the Luca Guadagnino directed genre pic has made $146,7K from five theaters in NYC and LA. A single digits five-day take is expected.