“I’ve been in the hospital three times, and every time, I went through the phase of believing that I didn’t belong there and I was somehow separate and possibly superior to those around me,” say Wakefield creator and co-showrunner Kristen Dunphy about some of her inspiration for the Australian series now airing on Showtime. 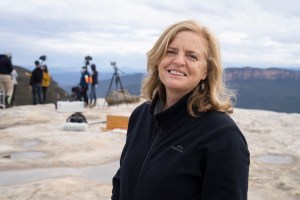 “I really do think that’s really a defense mechanism before you are humbled by the realization that you are no different to anyone else,” the scribe adds.

Having debuted Down Under on public broadcaster ABC earlier this spring, the Rudi Dharmalingam-starring dramedy explores mental illness at the frontline and what happens when the person who is supposed to be taking care of the patients begins to lose himself? Essentially, what is the line between sane and insane and how easily is it crossed?

ViacomCBS-owned Showtime picked up the protean Wakefield back in July and started broadcasting the eight-episode series on October 18.

Unlike almost anything on American television both in terms of content and sensibility, Wakefield shines a light into some of the darkest parts of the psyche and the psychiatric industry. To that end, Dunphy spoke with me from Australia about her very personal nucleus for the series, the response it has had, and why she’s proud to let the world know she’s “batshit crazy.”

DEADLINE: Wakefield is a deft combination of comedy and drama. Why did you chose to take that approach with it to tell the story of what is the sanest man in an insane place?

DUNPHY: Mental illness itself is a pretty difficult subject for most people to talk about and let alone watch a television program about it.

I noticed that it’s also a world that’s completely underexplored on television, at least, and I guess, my assessment of that really was that people are pretty afraid of the subject. My feeling was that the series really had to be a combination of humor and drama in order to make it entertaining viewing. I guess too, having been a person myself, you know, anyone who’s been in one of these facilities knows that it’s extremely tragic and hilariously funny at the same time. I mean, it’s not funny when you’re in it, but your observations when you look back on it, there’s humor in there, and you know that’s a good way to sell something that’s confronting.

DEADLINE: How much do the characters draw from your own experiences and how much do they come from being created by you?

DUNPHY: I guess, it’s fair to say, that many of those characters have parts of me in them. I’ve taken bits and pieces from various patients I met in hospital, which, you know, I guess, at the time, wasn’t very entertaining because, ironically, you go into what we used to call an asylum, which really means a place of refuge and protection and safety, it’s come to have other meanings. Ironically, when we go into one of these places, we’re going in there to get better, but the places that we go to get better are often populated by people who, initially at least, make us feel worse.

DEADLINE: It feels like a place both in and out of time, a sanctuary and a prison …

For example, in the first episode, James is in the hospital but still believes that he’s somehow separate from the other patients, feels he doesn’t belong there. You know, I’ve been in the hospital three times, and every time, I went through the phase of believing that I didn’t belong there and I was somehow separate and possibly superior to those around me. I really do think that’s really a defense mechanism before you are humbled by the realization that you are no different to anyone else.

Other characters are more obviously autobiographical in part. So for example, Ivy, who’s also in the first episode and played by Megan Smart, she has postnatal depression. For her, that’s a big component of anxiety and terrible fear of leaving the hospital in case she can’t cope without the help with her 2-year-old and newborn. You know, I drew on my own experiences, but obviously, I also have drawn from people that I’ve met in the hospital and research that I’ve done outside of hospital with nurses and psychiatrists. 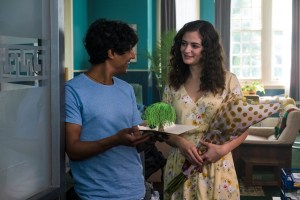 DEADLINE: You talked about postpartum depression as one of the things that you…and I hope I’m not misunderstanding that’s something you yourself experienced?

DUNPHY: Yes, that was my first hospital admission was with postnatal depression with my second child.

DEADLINE: What was it like taking that from your life and bringing that to the small screen?

DUNPHY: It was very helpful.

I mean, postnatal depression can become very serious, it can be psychotic. I didn’t have the psychosis that some women experience. Traditionally, those women were thrown into hospital without their babies, and it was very common for women to be institutionalized for these kinds of things. Things have changed, a bit.

DEADLINE: The show has attracted a lot of attention here in the U.S., but what has the response in Australia been?

DUNPHY: We’ve had an overwhelmingly positive response. I don’t think we’ve had any negative response, which is extremely surprising. I actually did a sort of social media, I guess, first aid course, if you like, in the expectation that we would receive a lot of abuse because of the subject matter, but we actually had none.

DUNPHY: We had 5- and 4-1/2-star reviews across the board, so it was critically a good time. For me, what was more gratifying than that was just the response of people writing letters and on social media just overwhelmingly positive in the sense that people often haven’t seen this world on television, at least, and not a lot of films since One Flew Over the Cuckoo’s Nest, which just scared the sh*t out of everyone. I mean, that film was brilliant, but we’re talking about it’s based on a book from the ‘60s, and it was made in the ‘70s, so psychiatric medicine has come a long way since then. It’s not perfect…

DUNPHY: …By any stretch of the imagination. People get better a lot, now, so it’s a lot more positive.

DEADLINE: Based on that, are we going to see more Wakefield?

DUNPHY: We would love to do a second series. That will depend on how it goes because, you know, Australia, we can’t finance a show without international money, so it all depends on how it does internationally, but cast and crew are very keen, and the creators are very keen.

DEADLINE: So, in that vein, being that you are halfway through the first season airing here in the U.S., what do you want viewers to get from Wakefield?

DUNPHY: That is the bottom line, that we are all human beings and that the stigma around mental illness is what’s so damaging. If we could all normalize some of these experiences by talking more openly about what we’re going through when we’re going through it and accepting that we are all on a spectrum. I also think people need to have permission to laugh not at people but about what it is to be human.

DEADLINE: I love the sound of that, but what do you mean?

DUNPHY: I personally have come to a point where I’m not ashamed anymore, that’s taken me a long time.

I wear a T-shirt that says “Batshit Crazy” on the front of it that, you know, it’s got “Wakefield” on the back. I gave all those T-shirts to cast and crew because I feel that we need to, firstly, accept that we’re all human and that means we’re all either crazy or we’re all sane, So, you know, have a sense of humor about it.

It’s the main thing about Wakefield that I’ve tried to do, and is to, I guess, approach all characters, every single character, with compassion, and I guess, also, it was really important to myself and Sam Meikle, who’s my co-writer and co-showrunner, that we didn’t use labels for the patients. You’ll notice we don’t identify by label what their condition is, because we all have something to deal with, right?