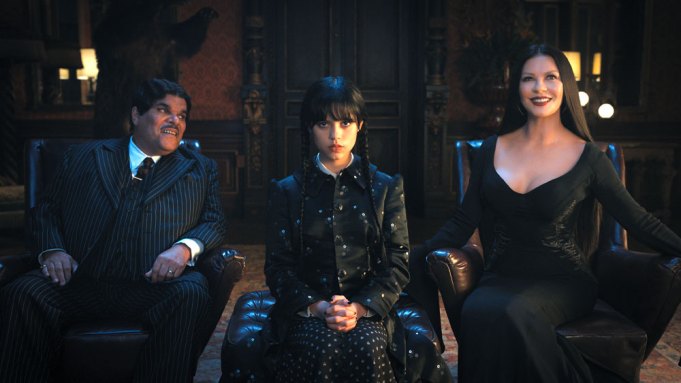 Wednesday is a new take on The Addams Family, the classic cartoon strip created by Charles Addams. The Netflix series focuses on the titular character played by Jenna Ortega with her family only appearing sprinkled throughout the season.

However, co-showrunner Miles Millar says that Wednesday’s family, which includes Catherine Zeta-Jones as Morticia and Luis Guzmán as Gomez, could be featured more in a second season.

“We felt like we just touched the surface with those characters and the actors are so amazing in those roles,” Millar told TV Line in an interview. “Catherine is, I think, an iconic Morticia. The relationship between Wednesday and Morticia is also essential to the show, and the idea that Wednesday is trying to forge her own path outside the family is important.”

Although Wednesday has not been renewed by Netflix for a new season, Millar says that they “definitely want to feature the family as we did this season in a couple of episodes if we were to get a second season.”

Ortega is receiving praise for her portrayal of Wednesday Addams, a character that her costar Christina Ricci played in 1991’s The Addams Family and the 1993 sequel Addams Family Values. Even though they both shared a set, Ortega said in an interview that she didn’t ask Ricci for advice because she didn’t want to “rip her off.”

“I think when she was on set, neither one of us said Wednesday once to each other,” Ortega told MTV News. “I don’t think she wanted to get in the way of my performance and feel like she was overbearing. And then I felt like I didn’t want to pull up something that she did 30 years ago, for one, the sake of my own benefit, but two, I didn’t want to rip her off. And I didn’t want to be too much like her.”

All episodes of Wednesday Season 1 are now available on Netflix.