William Lucking at ‘Sons of Anarchy’ premiere in 2008
Everett Collection

William Lucking, who played Piney Winston in FX’s Sons of Anarchy and had 100-plus other film and TV credits during a nearly half-century career, has died, his agent confirmed to Deadline. He was 80.

Lucking died October 18 at his home in Las Vegas. No cause of death has been revealed.

An obituary shared by his wife Sigrid Lucking reads, “Although William often played toughs and strongmen, in his actual life he was an elegant man with a brilliant intellect who loved to argue about politics and current affairs, discuss philosophy and physics, and assert fine-pointed opinions about art and poetry.”

Lucking was born on June 17, 1941, in Michigan and moved with his family to California in the 1950s. With a degree in literature from UCLA, he furthered his theater studies at the Pasadena Playhouse. 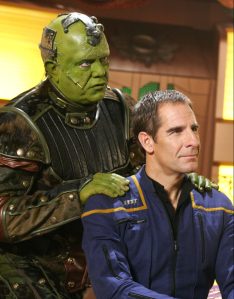 Throughout his lengthy career in Hollywood, he portrayed a diverse range of characters on the big and small screens including 1976’s Oklahoma Crude, opposite Faye Dunaway; the original Colonel Lynch in NBC’s The A-Team in the ’80s; and in different roles in the Star Trek series Deep Space 9 and Enterprise during the 1990s and 2000s, respectively.

Lucking began his career in the late 1960s and early ’70s with guest roles on such popular series as Mission: Impossible, Ironside, The Virginian, The Partridge Family, and Bonanza. He continued to work regularly in films and television through the ensuing decades, with roles on series including Kojak, Gunsmoke, M*A*S*H, CHiPs, and The Waltons, such movies as Doc Savage: Man of Bronze, Extreme Justice, and The River Wild. 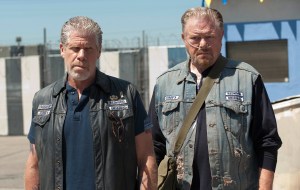 Ron Perlman with Lucking in ‘Sons of Anarchy’
Everett Collection

Lucking joined the cast of Kurt Sutter’s biker drama Sons of Anarchy during its debut season in 2008 in the role of Piney Winston, one of the founding members of the motorcycle club with his best friend John Teller. The character was part of the First 9 and known to fiercely protect the legacy of the club from both outsiders and, more important, insiders like Clay Murrow (Ron Perlman), who was ruining the club and what it originally stood for.

But after being diagnosed with emphysema in 1991 and a heavy drinking problem, Piney’s health began to falter. He remained on the show for four seasons and nearly 50 episodes, complete with oxygen tube, until the character was murdered.

Lucking is survived by his wife, two daughters, Marjet Lucking and Juliana Ryan, and their families.